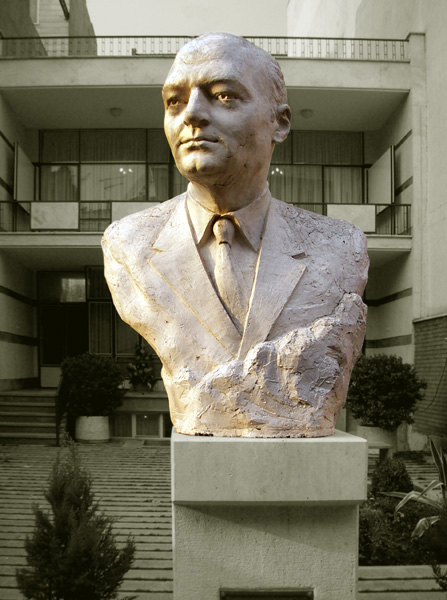 Another day I visited Dr Ali Shariati's house which was converted to a small museum. As you would see here, his house is in the background behind his statue.

Dr Ali Shariati (1933-1977) has been called the "Ideologue of the Iranian Revolution." His reinter pretation of Islam in modern sociological categories prepared the way for the Islamic revival that shook Iran in 1979, attracting many young Muslims who had been alienated both from the traditional clergy and from Western culture.

Dr Shariati was born in Mazinan, Khurasan, a small village in Eastern Iran, in 1933 and was educated by his father, Aqa Muhammad Taqi Shariati. His youth was spent in Meshad where his father established the Center for the Propagation of Islamic Teachings. After high school he entered Teachers' Training College and became an active member of his father's center. He entered the University of Meshad in 1956, graduating in 1960. From 1960 to 1964 a state scholarship enabled him to study at the University of Paris, where he gained sociological insight and pursued Islamic studies with the renowned French scholar Louis Massignon. In France he was influenced by the radical Marxism of Jean-Paul Sartre, Albert Camus, and Franz Fanon. Despite this influence he criticized these thinkers for their rejection of traditional religion and suggested that the only way the deprived nations could counterbalance Western imperialism was through the cultural identity preserved by religious traditions.

While in France Shariati had joined with such other Iranian expatriates as Mehdi Bazargan and Bani Sadr who supported resistance to the shah of Iran. Not unexpectedly, he was imprisoned for a time on his return to Iran in 1964. Although turned down for a teaching position at the University of Teheran, he taught at a variety of high schools until a position became available at the University of Meshad. There he became a popular teacher, using an innovative method which expounded Islamic doctrine using a sociological approach. While some Muslim clergy criticized his lack of Islamic expertise, others sympathized with his attempt at modernization and helped him revise the content of his writings. His classes, however, threatened the government establishment, which had them suspended.

In 1965 he established a center of Muslim religious teaching, the Husaniya-yi Irshad in Teheran, and he moved there in 1967. The choice of an institution dedicated to the martyrdom of Husayn in the struggles against the Ummayyads (660-750 A.D.) emphasized his commitment to the struggle against the tyranny of the shah's regime in Iran. His political influence was so great that the regime had him arrested again in 1973 and closed down the Husaniya, banning his works. Although released in 1975, his freedom was restricted. In June 1977 he travelled to England, where he died under circumstances that his supporters insisted suggested the involvement of savage SAVAK, the Iranian secret police.
http://www.answers.com/topic/ali-shariati
http://www.shariati.com/
http://www.iranchamber.com/personalities/ashariati/works/fatima_is_fatima1.php
http://www.iranchamber.com/personalities/ashariati/works/expectations_of_muslim_woman.php